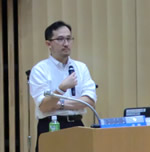 For the interdisciplinary seminar held on 20th of July 2016, we had been honored by the visit of Prof. Yasuteru Urano who is a brilliant “young” Professor working at the Laboratory of Chemistry and Biology, Graduate School of Pharmaceutical Sciences and Laboratory of Chemical Biology and Molecular Imaging, Graduate School of Medicine, Tokyo University. Prof. Urano graduated in 1990, and got his PhD in 1995 from Tokyo University. He had been promoted to assistant professor in 1997 after 2 year postdoc funded by JSPS and received Young Investigator Award of Pharmaceutical Society of Japan in 2004, Young Investigator Award Selected by the Ministry of Education, Culture, Sports, Science and Technology of Japanese Government in 2006, and Invitrogen-Nature Biotechnology Award in 2006. He dedicated his career to the design and creation of photo-functional probes applicable to medical technology. Hence the presentation he gave at Tohoku University.

At the beginning of the conference Prof. Urano stated some background on fluorescent molecules, which have been widely used in life science imaging since years for tracking or analyzing biological molecules by means of fluorescence. Historically common fluorophores are derivatives of rhodamine, coumarin and cyanine. However, the probes developed present some limits related to their unsuitable use for application in living cells or in vivo, and the use of ultraviolet (UV) light excitation which generates free radicals that are toxic to cells and increases the background auto-fluorescence, moreover physico-chemical conditions like temperature, solvent and pH can affect the duration or the brightness of the fluorescence.

In the past decades, large efforts had been put on the development of new optical probes for in vivo imaging applications where imaging agents are designed based on approaches classified into: non-targeted, targeted and activable probes, Prof. Urano focused on the last and specifically on static quenching activation mechanism. He and his team were the pioneer to show that the regulation of the spirocyclization of acetyl hydroxymethyl-rhodamine green (J. Am. Chem. Soc., 2007, 129: 7313-7318) could lead to the design of a wide range of analytes highly sensitive to proteases and glycosidases and with a high fluorescent property just by replacing the acetyl group of Ac-HMGR with the appropriate substrate moiety of the target enzyme (J. Am. Chem. Soc., 2013, 135: 409-414). This design strategy will be, as Prof. Urano emphasized, even suitable to develop probes for a wide range of enzymes activities for imaging in live cells.

Figure. Chemical structures of HMRs and the corresponding acetylated derivatives.

Indeed, this rational design strategy revolutionizes medical imaging offering various applications that Prof. Urano didn’t fail to enumerate:
At first, he mentioned the rohdamine-based fluorogenic probes they designed and synthesized that can detect Hypochlorous Acid (HOCl), one of the reactive oxygen species (ROS) produced by immune cells during inflammation. Also by regulating the spirocyclization of the fluorescent molecule, the derivative probes showed advantageous properties they acquire at aqueous solution and physiological pH conditions in addition of being highly resistant to autoxidation and photobleaching and importantly they showed good tissue penetration allowing the detection of HOCl inside phagosome in real time (J. Am. Chem. Soc., 2007, 129: 7313-7318) and in a mouse peritonitis model (J. Am. Chem. Soc., 2011, 133: 5680-5682). The design of these new activable fluoreginc probes brings a hope for enlightening the biological activities of these ROS in various diseases such as hepatic ischemia-reperfusion injury, atherosclerosis, lung injury, and rheumatoid-arthritis.

Because the development of highly sensitive and specific molecular probes for cancer imaging still remains a daunting challenge, Prof. Urano praised the advantages of generating novel activable imaging probes that can provide high-resolution imaging with ultra-low background signals for cancer imaging either for diagnosis or in a therapeutic use.

At first he humbly mentioned the work of another pioneer team who was the first to generate “polymer-based” activable probes directed by Prof. Weissleder from Massachusetts, USA. This team was able to generate activable reporter probes to sense Matrix Metalloproteinase (MMP) activity in intact tumors in nude mice in order to image the anti-proteinase efficiency of MMP inhibitors developed as cytostatic and anti-angiogenic agents (Nat. Med., 2001, 7(6): 743-748).

Thereafter, Prof. Urano mentioned other works he conducted with his team by the distinction between normal tissue and cancer for surgery or endoscopy purpose. They had been able to synthesize a rapidly activable cancer-selective fluorescence imaging probe, named γ-glutamyl hydroxymethyl rhodamine green (γGlu-HMRG) activated by the γ-glutamyltranspeptidase (GGT), an enzyme exclusively overexpressed on the cell membrane of various cancer cells. This kind of probe was activated in vitro on various human ovarian cancer cell lines and in vivo in mouse models of disseminated human peritoneal ovarian cancer (Sci. Trans. Med., 2011, 3: 110-119). Prof. Urano didn’t stop there, but he even pushed the application of the γGlu-HMRG probes further in breast-conserving surgery. Indeed, the above mentioned activable probe helped the discrimination of breast tumours at even 1 mm in size from normal mammary gland tissues with a high sensitivity and specificity in a very short time after a simple pray application of the probe solution on fresh biopsy samples. 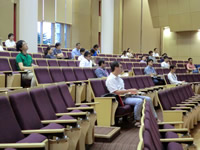 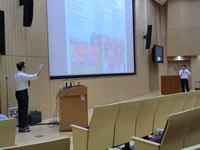 In conclusion, taking all together the generation of activable fluorogenic probes highly specific to various enzymes allows targeting biomarkers directly in fresh specimens screened with naked eye offering a large application in cancer imaging. Taking into account the enthusiasm of Prof. Urano in innovating and improving the use of this type of probes in cancer imaging, I am curious to know what will be next!!